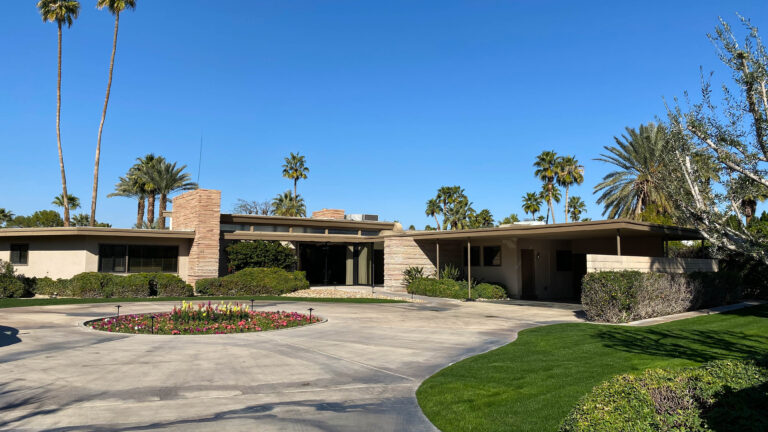 Escaping the dreary winter, I recently attended Modernism Week in Palm Springs which offered tours, lectures, and presentations featuring mid-century designed homes and other buildings. The mid-century modern design period was most prolific from the 1940’s to the 1960’s, and has gained a renewed interest recently.

One iconic Palm Springs residence that was open for tours was Frank Sinatra’s Twin Palms Estate. The home was built in 1947 and showcased the new “desert modernism” style, which is must different than the Georgian Colonial that Frank originally requested. The primary features are low horizontal roof planes with deep overhangs to shield broad expanses of glass. It became the setting for entertaining many celebrity guests. The Sinatra master bathroom still has the original sink with a crack formed due to a champagne bottle Sinatra hurled in the general direction of Ava Gardner. The fight with Ava Gardner ended with Frank throwing all her possessions out onto the driveway. 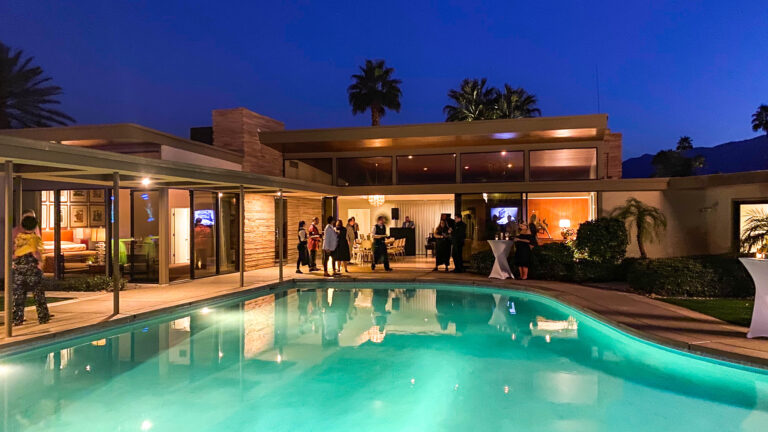 Large expanses of glass encompass much of the the exterior walls facing the rear yard of the Sinatra home as they wrap around the infamous piano shaped pool. 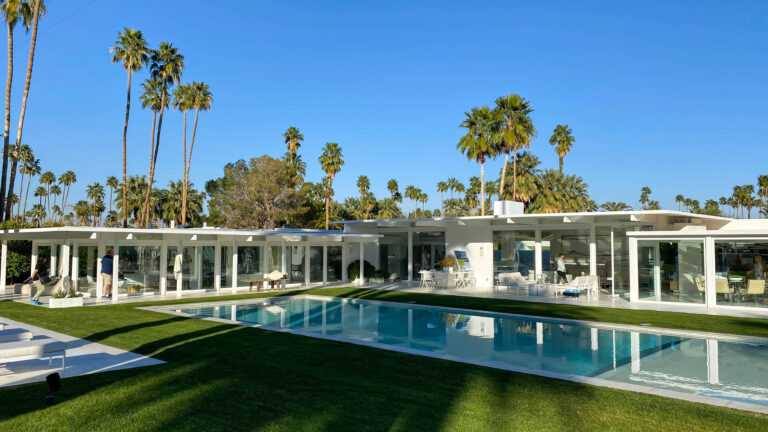 Another Palm Springs home once owned by the actor William Holden from 1966 to 1977, was originally built in 1955 for a prominent Illinois family. The house has deep roof overhangs shielding the floor to ceiling glass from the desert sun. The U-shaped house wraps around a large swimming pool and lawn. The landscaping for too many area homes and golf courses still embrace lush green grass instead of conversion to planting suitable for a drought-threatened desert climate. The rear walls of the Holden House are all glass, with beautiful views of the San Jacinto Mountains. 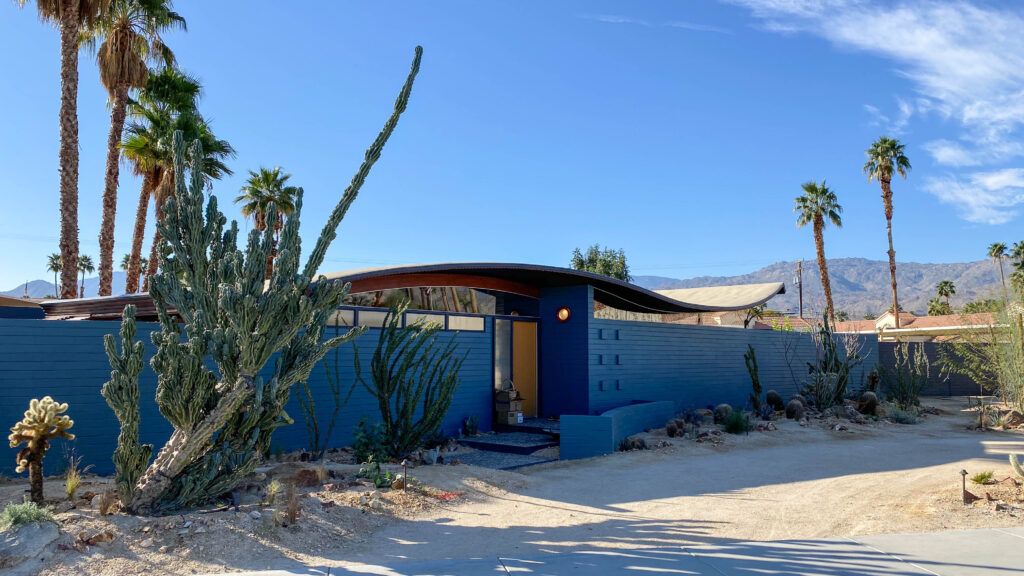 Once planned to be demolished, the Miles C. Bates “Wave House” in Palm Desert has been beautifully restored. Environmentally sensitive desert landscaping has been incorporated at the front of the house which features a curving roof that appears to float above a windowless wall. A unique historical feature of this small one-bedroom, 800-square-foot home is the patented one-of-a-kind roller coaster shaped roof made of wooden dowels. The solid exterior wall facing the street affords privacy while natural light flows from the clerestory windows above. 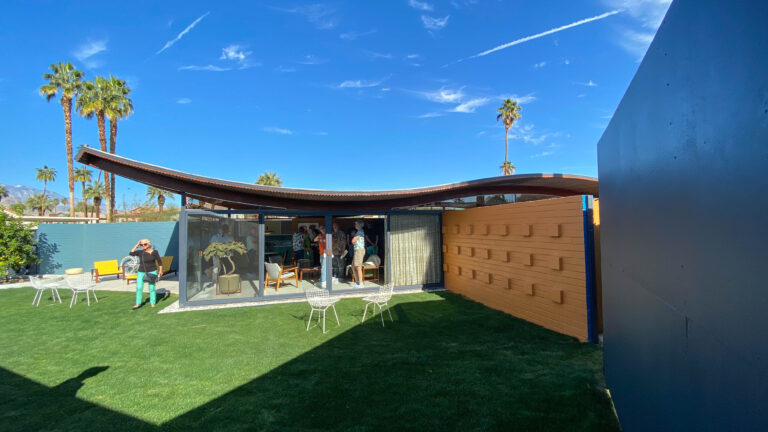 Exterior walls facing the rear yard have an abundance of glass shaded by the overhanging roof. 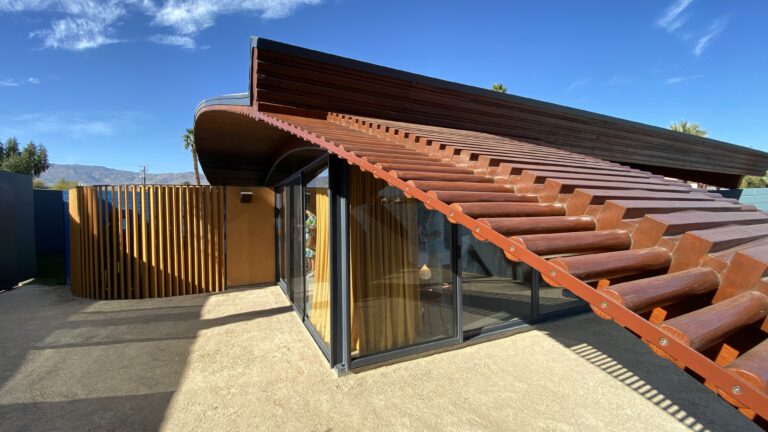 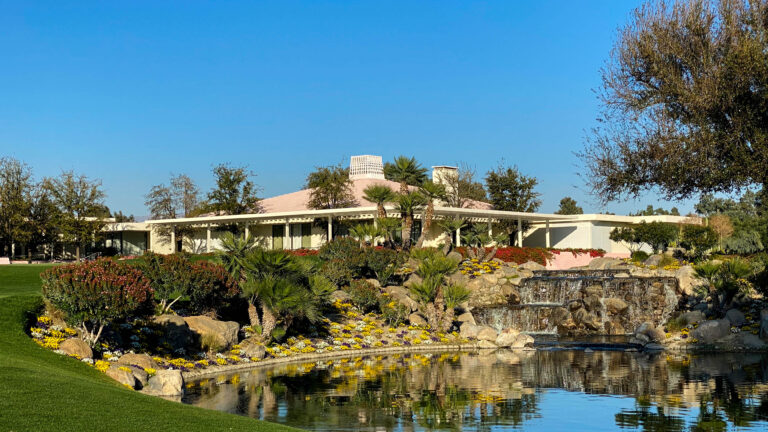 Sunnylands is the former 200 acre Annenberg Estate, located in Rancho Mirage, California. It was completed in 1966 and used as a winter retreat for Walter and Leonore Annenberg until 2009. Significant property features include the main house, guest quarters, three guest cottages, a private 9-hole golf course, and 13 man-made lakes that now serve as a retreat and meeting center for U.S. Presidents, foreign dignitaries, and celebrities.

Despite wanting to build their getaway home in the California desert, the Annenberg’s preference for landscaping was lush greenery and flowering plants. Since transferring the estate to a not-for-profit organization, the terrestrial design is changing to an ecologically acceptable arid landscape. Although there is still much more transitioning to be done, the new planting design features desert flora that requires less water to thrive.

This view is from the private golf course with a man-made waterfall on the Annenberg Estate. 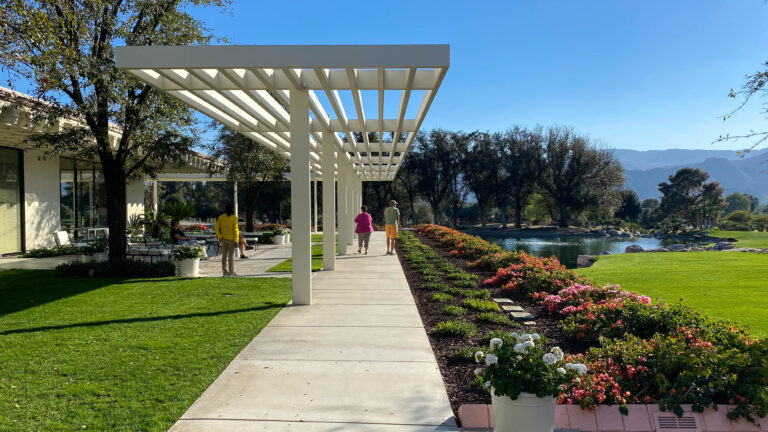 White trellises and flowering gardens surround the exterior of the former Annenberg home. 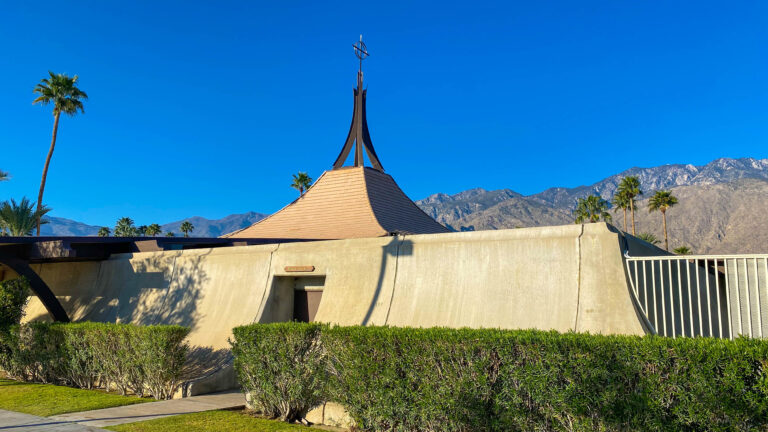 St. Theresa Catholic Church, completed in 1968, features a curving roof above a worship space that resembles a Japanese temple. The curved concrete walls surrounding the exterior help create a spiritual separation from the secular world, like California mission churches.

View of the curved roof and enclosure walls at St. Theresa Catholic Church. 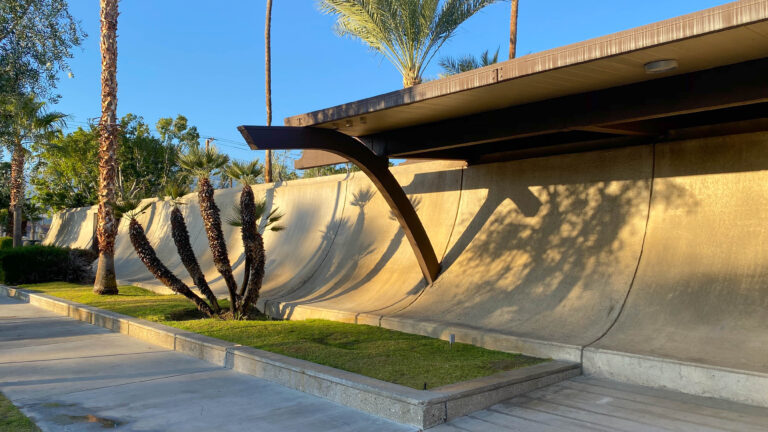 Asian inspired details can be found throughout the property. 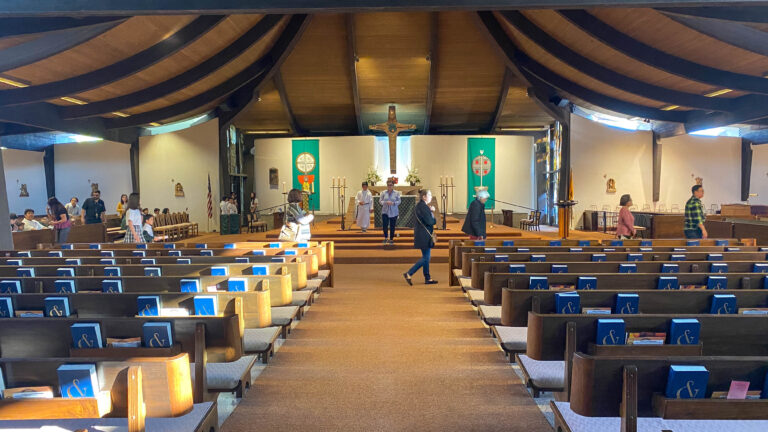 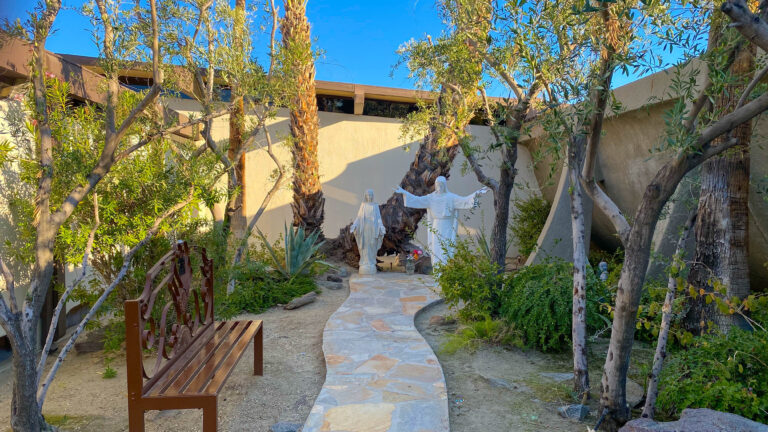 Landscaping inside the curved walls of St.Theresa changes to plants that can thrive in the desert climate with little water required. 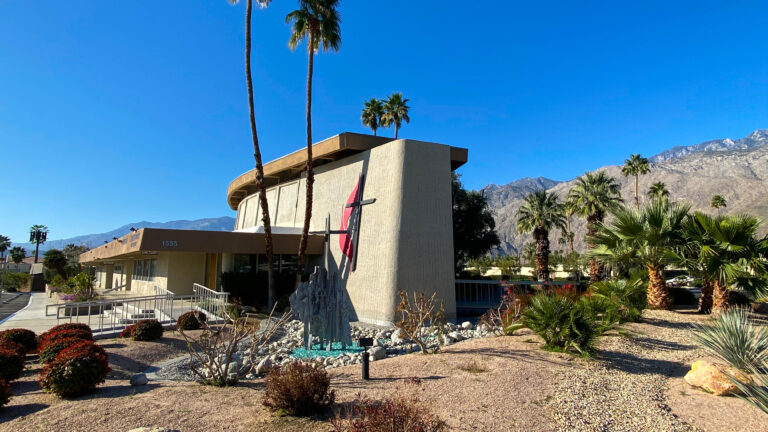 Heavy, poured concrete walls rise from the desert landscape surrounding Palm Springs United Methodist church, which was completed in 1965. Natural light from a large window pours into the worship space and provides views of the nearby San Jacinto mountains. A plaque on one of the pews marks Elvis Presley’s favorite seat.

The thick rusticated concrete walls and heavy roof feel at home with the mountainous landscape in the background. 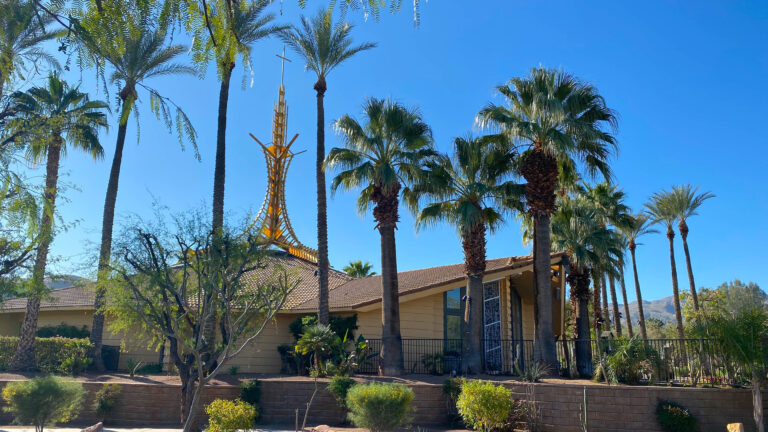 St. Louis Catholic Church in Cathedral City, completed in 1973, has an octagonal shape like many Midwestern church buildings. The design of the metallic steeple is reported to have been influenced by the Eiffel Tower. The tower’s organic design also reminds me of work done by some of Frank Lloyd Wright’s disciples. Frank Sinatra’s mother Dolly attended twice a week and was the site for the second marriage of Nancy Sinatra.

View from the parking lot at St. Louis Catholic Church in Cathedral City. 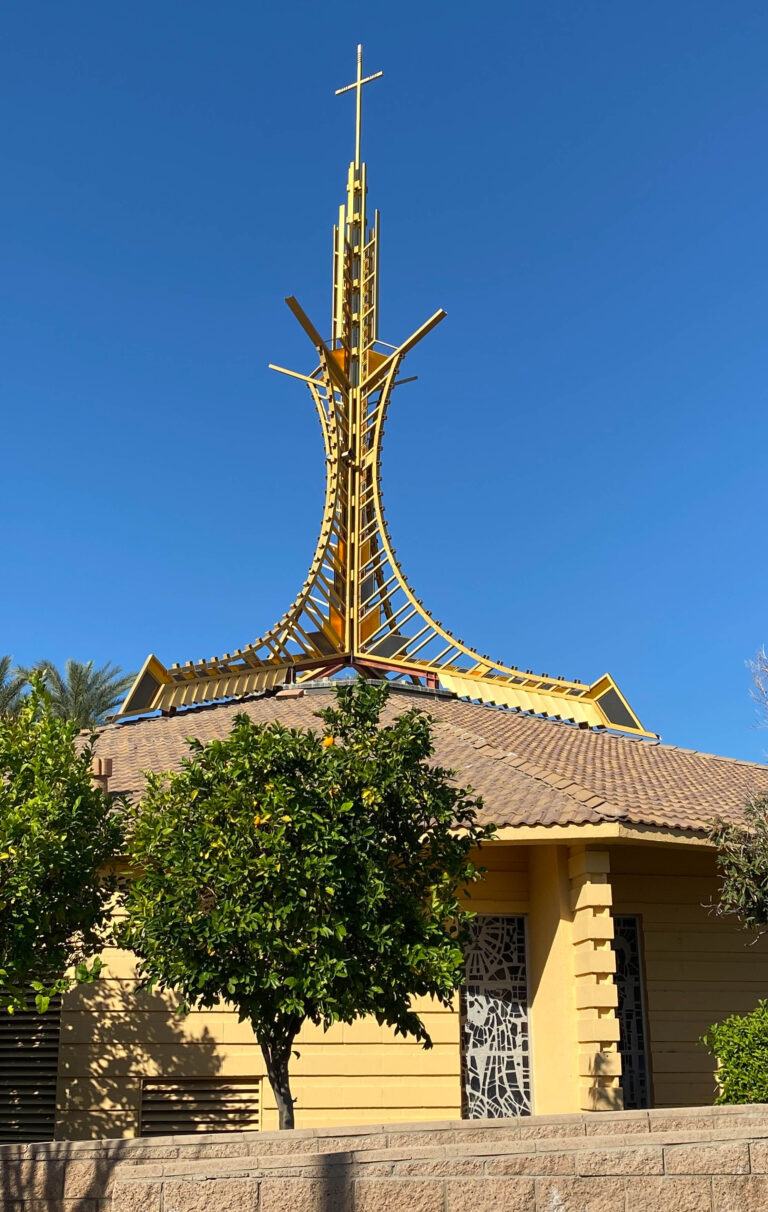 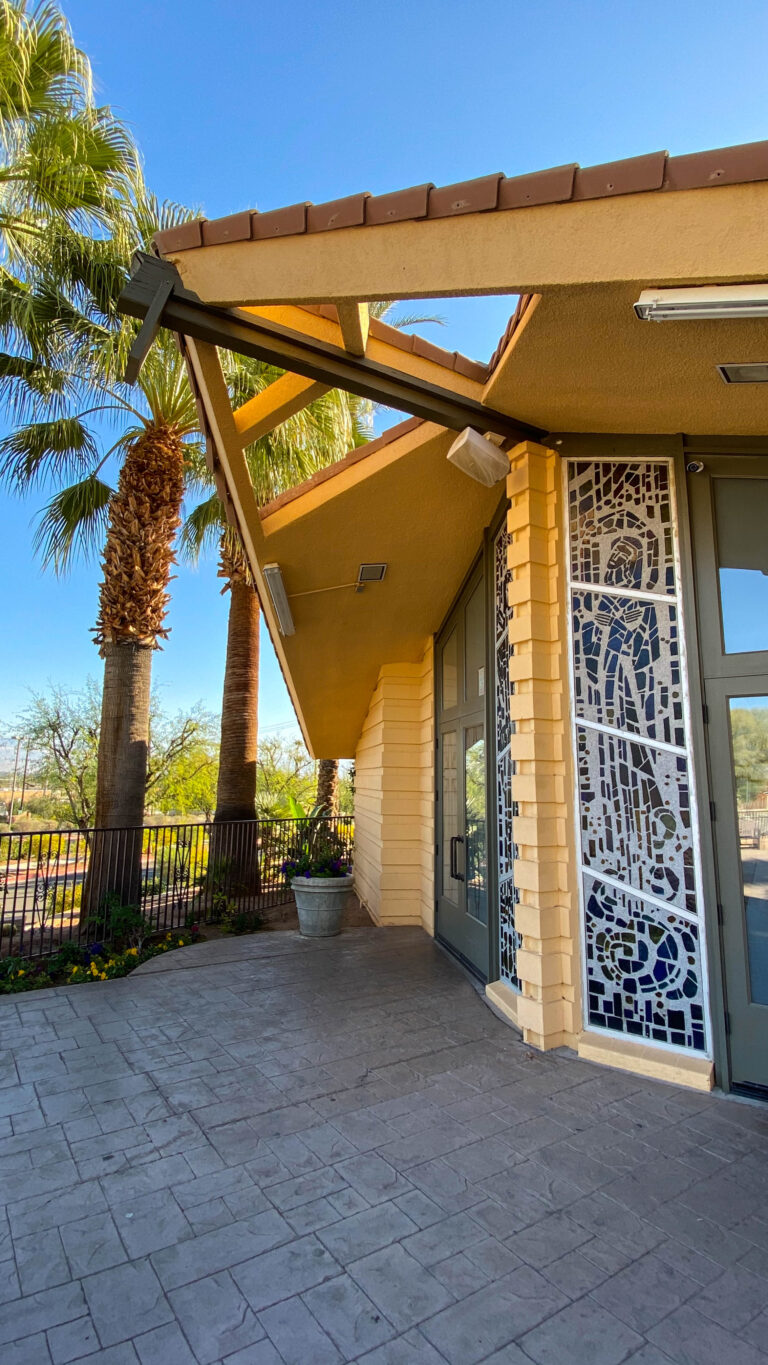 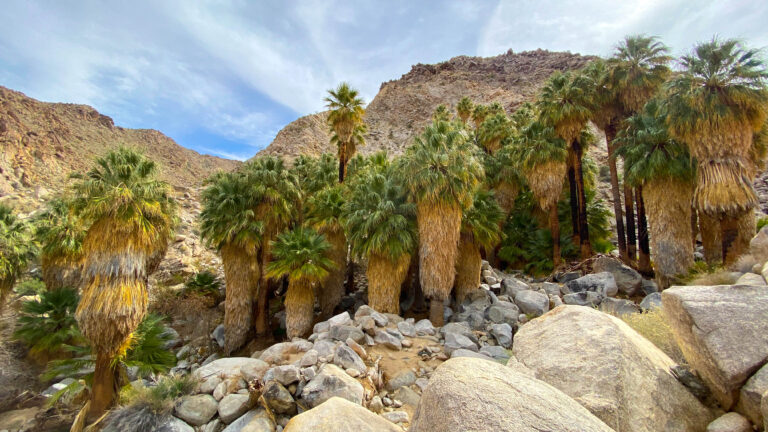 Nearby Joshua Tree National Park is an excellent location to observe the fabulous variety of native plants that can thrive naturally in the desert. The Fortynine Palms Oasis shown above is supported by a natural spring. I hope that more Coachella Valley landowners quickly take to heart the need to develop more sustainable landscapes.

Preserving church and faith based school buildings requires a good maintenance plan with an emphasis on sustainability. An architectural Master Plan is essential to assure any planned building maintenance is coordinated with future building plans.

Potential maintenance items that can affect environmental sustainability are: